The Border Collie comes in various colors, and some of them are common while others are rare. The rarest are those who have a pure white coat from head to toe.

White coloring or marking in Borders is common, but some are controversial. Keep reading to find out why and if white Border Collies are different from the colored ones.

All-white Border Collie puppies come from parents who are both merles (carriers of the merle gene). In fact, a primarily white coat appears on other breeds too, such as Australian Shepherds (Aussies), Shetland Sheepdogs (Shelties), and Standard Collies (both rough- and smooth-coated).

Almost all Borders have white markings. It’s either a small amount, partial (parti), almost, or completely white. White factor, a term used to refer to heterozygous dogs, is a recessive gene that affects the amount of white spotting. 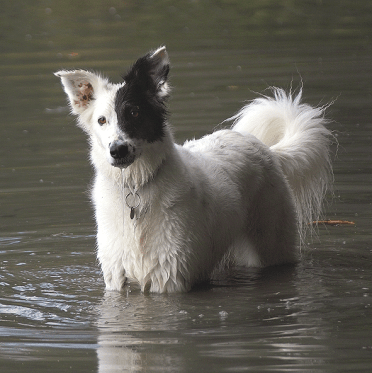 You’d find Border Collies who either have none or tiny white spots on their chest and toes. They mostly are tricolor – black, tan, and little white blazes.

The second form creates a white blaze on the face, broad collar area, belly, legs, and the tip of the tail. The pattern is often referred to as “Irish” and can sometimes vary. Others call it piebald, which is also a patterned-white coat with some colored-spotting. If there’s so much pigment, it can be just a high-white normal merle.

The third and last one causes excessive white coloring that ranges from minimal to an all-white coat.

A pair of white-factored Borders can produce color-headed white puppies.

No matter the color, a Border’s double-layered coat can range from short and smooth to long and rough. It can also be either be straight, wavy, or curly. The most popular and common color of Border Collies is black and white, but as we mentioned earlier, their hair can appear in just about any color pattern.

Borders can also have single-color furs such as Australian red, which is also known as blonde or gold. But it’s less frequent.

The Border Collie breed is not hypoallergenic and sheds throughout the year. It gets worse during shedding season as their hair is transitioning from a winter coat to a summer coat.

Border Collies have eyes that can vary from blue to brown. But if the dog is a lethal white like an albino, they do have blue eyes.

There would be times that they’d have different colored eyes due to the lack of pigmentation in the eye called heterochromia. It’s commonly seen in merle Borders, but even black and white Border Collies can have blue eyes.

Aside from the eyes, white or double merle Border Collies have a nose that is mostly or all pink.

Every Border Collie would have that noticeable intense gaze called the eye, that they use for their crouch and stare when controlling sheep.

In this video, you can see what an all-white or albino Border Collie looks like. Aside from the color, it’s still energetic like other Borders:

There’s a belief going around that a Border Collie with a white coat wouldn’t be an efficient working or herding dog.

Farmers or ranchers have a superstition that sheep will not respect or follow a dog that’s white or has the same shade of color as theirs. But organizations, such as the American Border Collie Association (ABCA), considers a Border’s appearance to be irrelevant to their job or task.

A dog’s attitude and skills are more useful in identifying its ability to work (like herding).

Canines used in dog shows have physical traits that are more homogenous compared to working Border Collies. In order to win, they must conform as close as possible to the breed standards. There are many points that can be specific, such as coat and structure.

The American Kennel Club (AKC) has a breed standard that specifies a preference to a Border Collie with dark brown eyes, as well as a keen and intelligent expression. Any broken teeth or scars will not be counted against the dog when inside the ring in deference to their working origin. And the white should not predominate their coat color.

Do white Border Collies have a different temperament?

For Borders, coat color doesn’t affect their personality. They are still the smartest dog in the canine world, and would always have the same energy that their breed is known for.

They’re not only hardworking, but they’re also loving family companions.

Border Collies do well with kids and other pets like cats. But do be aware of their herding instinct, which means they may herd and nip. It’s a trait that’s bred into them. You can only control it with early training, but it’s not possible to completely get rid of it.

The bottom line is, a Border Collie would do great as a working or herding dog, and as a family pet if they’re adequately trained.

If you think it’s impossible to train a blind AND deaf dog, think again. There are lots of ways that you can teach primary and advanced commands, but some people use a vibration collar. Here’s how you can use it:

A pure white Border Collie is also called “lethal white,” which is a misleading and incorrect term. This genetic form is avoided by breeders and buyers as they can be considered defective, not because they’re lethal.

White-bodied dogs with also a white head mostly suffer from blindness and deafness. That’s why two merles shouldn’t be bred together as a quarter of their litter will inherit the gene that impairs the ability to make pigment.

Even those dogs who have some colors in their hair, but white overlaps on their eyes and ears can possibly have hearing and eye problems.

Keep in mind that NOT ALL Borders will suffer from being deaf and/or blind. 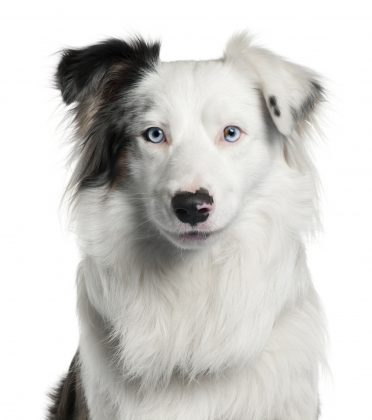 All dogs, no matter the color or breed, deserves affection, too.

We should never judge their abilities and personalities based on how they look. The way they grow up and behave will significantly depend on how they’re treated and cared for.

Some breeders don’t care about the consequences of breeding merles. They who only think about producing Border Collies with coat colors that are stunning, rare, and sometimes defective.

If you’re concerned about health issues, be cautious about most white Border Collies, even if they have colored spots or merles. It’s better if you’re aware that a merle dog is different from a double merle.

Other than that, ask essential questions about the conformation and background of the puppy you’re interested in. Even with medical records, you should still have your dog’s hearing, and eyesight tested. There’s nothing wrong with making sure, so you know how to help your dog adjust or live his or her life to the fullest.

Do you have a white Border Collie? Does he or she have health problems? How old is your Border dog? Let us know all about it by sharing your story in the comment box below.