Aside from being the smartest dog breed, Border Collies are work-driven and has good conformation. They also come in a variety of colors that are all stunning!

Borders are recommended for owners who love being active and spending time outdoors. Whether you want to get a puppy or plan on breeding them, it’s best to learn about their hair colors as well.

A Borders’ coat is double-layered but comes in two types. The first one is smooth and short, while the rough coat is medium in length and has feathering.

Perfect for their herding job and their love for the outside world, the Border Collie’s hair is weather-resistant, too. The downside is, they’re not hypoallergenic, but they only need to be groomed moderately.

The Border Collie Society of America (BCSA) and American Kennel Club (AKC)’s breed standard for this canine recognizes all the Borders’ colors and the mixture of shades, patterns, and markings.

It’s rare for the Border Collie to have one solid color, but they usually are bicolor, tricolor, sable, with merle, tickled, or in speckled patterns. Some of this breed also comes in seal, slate, and gold.

Here’s a video that serves like a slideshow of different Border Collie colors, patterns, and markings.

The most common Border Collie colors

We mentioned that Border Collies come in different colors, but some of them are uncommon.

So if you’re on the hunt for a good-looking Border (meaning this breed with a color you like), these options are often available. 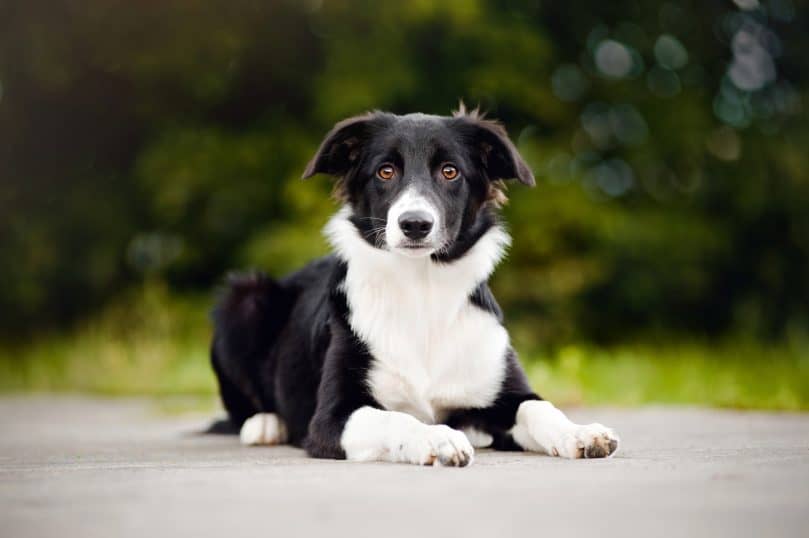 Whenever this breed is mentioned, a lot of people would picture them with two colors – black and white.

It’s technically the signature look of the Border Collie. Their body is mostly black with white markings on their face and underside. Some have their whole head covered in black fur while from the collar to the tail, it’s black and white.

Black is a dominant gene that makes it a standard for this dog. 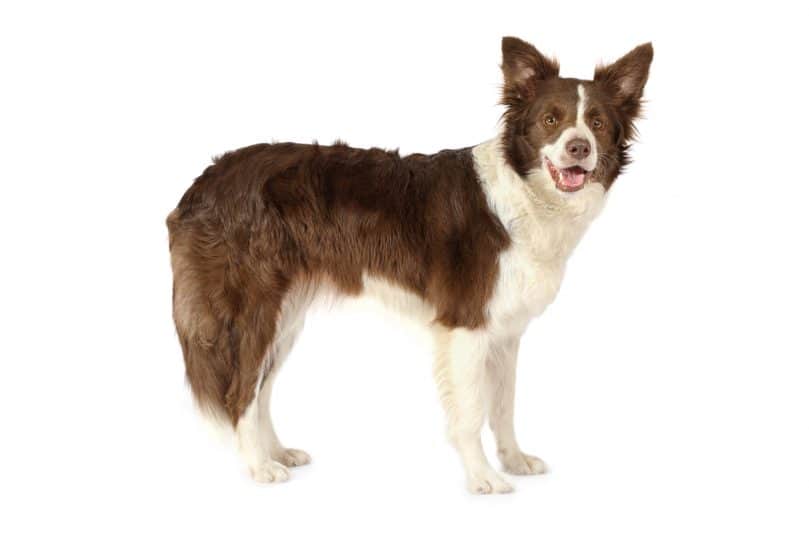 Another common color combination is brown and white, but others simply call it brown. It looks like the pattern of black and white Borders, but the shade can range from light to dark brown. The white is usually found at the collar and chest area, as well as the bottom.

Those Border Collies who have this bicolor have unique eyes. They’d either be light to medium brown, golden yellow, or green.

To get a brown Border Collie, its parents should both have a chocolate gene.

When we say “blue” in dogs, it doesn’t mean the solid color. It’s the term used to call the recessive dilute gene. This happens when the black color gets diluted that it makes a shade of slate, blue-ish, or a grayish undertone.

You may want to avoid going for a blue and white Border as they are susceptible to a condition called color dilution alopecia. All dog breeds that may have a blue coat can get this illness, which will lead to skin problems. 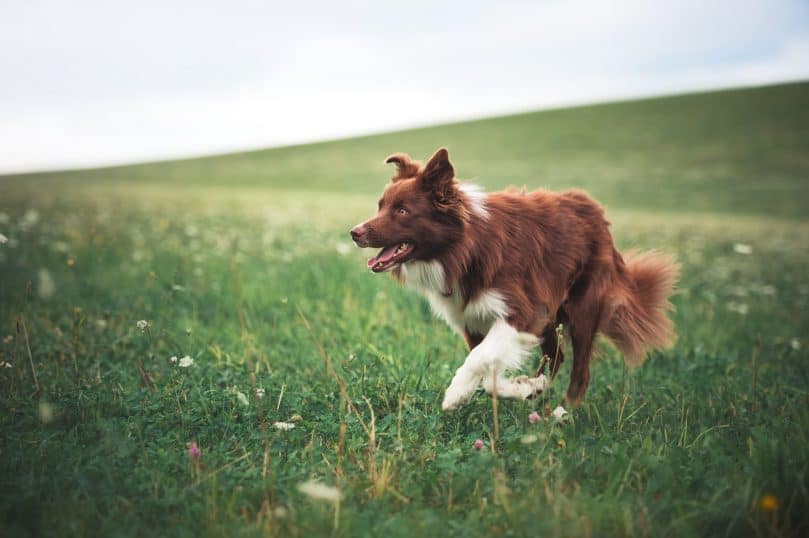 Also called as Australian/Aussie red, gold, yellow, liver, or tan, this shade isn’t that popular. Although it’s rare, this Border Collie color is recognized in the US.

The red color is a recessive gene, and Borders, who have this color, have parents who also have the same hue.

Another variation of this color is red merle.

Keep in mind that “merle” isn’t a color but a pattern that’s commonly associated with blue or red coats.

A dominant modifying gene causes the merle effect where a dog will have patches of pigmentation all over their body. For blue merles, their base coat color has a grayish or white base with blue-ish or black spots and patches.

The gene that causes the merle pattern doesn’t just affect the Border’s hair, but also their eyes and nose.

Blue merle Border Collies have bright-colored eyes, like blue. Don’t be surprised if your dog has different-colored eyes, also known as heterochromia, which is common in merles (another term for it is merle eyes). They also tend to have a pink nose.

They may be highly-sought-after and looks stunning, but the merle gene comes with a price – ailments such as blindness, deafness, and overall poor health. This is most common in double merle or lethal white Borders. 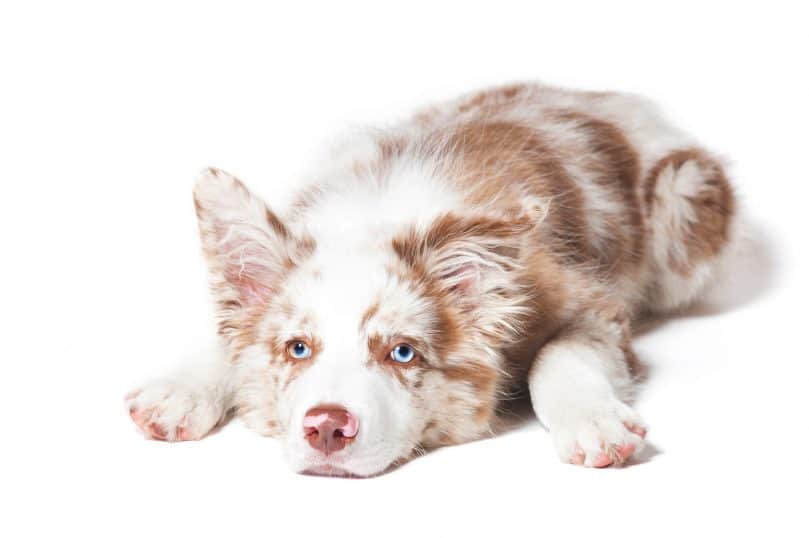 Similar to blue merles, red merle Borders have the red and white color as a base and the pattern that breaks up the color.

Some Borders would be mostly white with red, brown, or cinnamon patches all over their bodies. They also have a liver-colored nose.

The slate shade is more striking as the white, black, or blue coat color is diluted. Border Collies who have this coat has one parent who’s a merle, and the other has two recessive dilute genes.

Slate merles are becoming popular, but it’s not an official color of the Border Collie as per the AKC. 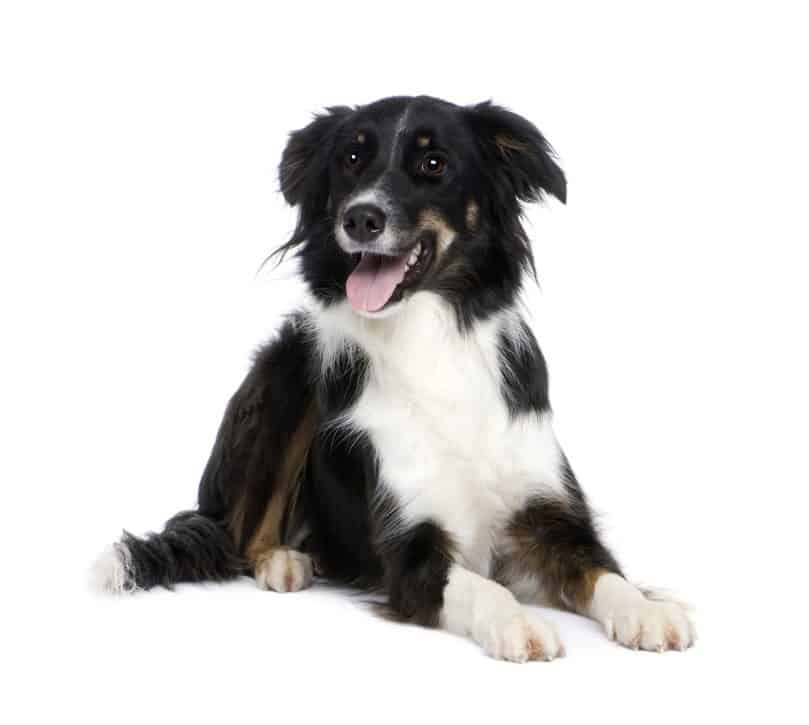 Tri-colors are quite common in this breed. They’re so beautiful on Borders that it’s their 2nd most popular coat variation.

It would usually consist of solid colors like red, blue, black, chocolate, then paired with white and tan markings. Others would even have three colors with a merle pattern.

Markings are commonly found on their eyebrows, cheeks, chest, legs, and bottom area.

For black tri-color Borders, they often have a black and white coat with tan markings. But then again, others can have different markings or patterns.

Blue tri-colored Borders also have a dominant merle gene. The only difference here is that only one of the parents is carrying that gene.

Their base coat color is similar to blue merles, but their markings are either copper or tan. They may have markings all over their body, in some parts, or just in one area.

This one has the chocolate recessive genes, but to get a tri-color, both its parents should have the tri-color gene and chocolate gene.

You’d find a chocolate tri-color Border Collie with brown as a base, then copper and tan markings.

Lilac is a unique hue that is sometimes referred to as fawn (in Kelpies), Isabella (in Dobermans), or silver. One thing’s for sure, it’s something beautiful. There are Border Collies that have a lilac merle, lilac tricolor, and lilac tricolor merle.

Being rare, this color is harder to breed. 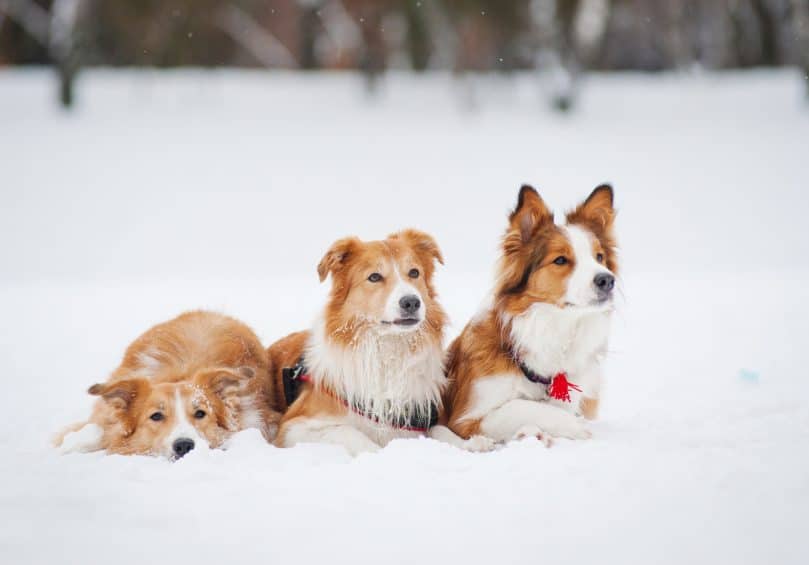 Sable Borders have fur that’s tan- or cream-colored and darker tips. Remember, sable is a type of marking, and it’s sometimes visible on the spots of the dog. Some have black roots, and the tip is light brown.

Even if it’s recognized officially as a color of the Border Collie, they’re fairly rare.

These Borders can have any base color mentioned, but the brindle pattern is an alternating stripe of red and black or yellow and black.

The pattern doesn’t just show anywhere on the Border Collie’s body as it usually affects the tan areas. With that said, if a Border has an overall tan base (a recessive yellow or Aussie red), then they may have an overall brindle.

The colors and markings we mentioned aren’t always visible in puppies. Once they reach maturity, then that would be their permanent coat color.

Some shades and patterns can determine a puppy’s health or temperament like merle, but not all of them. But whichever hue you’re interested in when searching for a pup, a legitimate breeder would show you essential documents, such as the medical records of the parents and their litter.

In fact, there are breeders out there who would even take the time to explain how the Border Collie’s genetics affect their color.

The Verdict: All Border Collie colors are beautiful

If you want to breed Border Collies, make sure that you follow standards and consider the dog’s health, not just getting the color you want.

Related to what Mrs. Barabara Carpenter said on The Border Collie Museum, dogs used to protect and herd livestock were not just bred for their abilities, but also for their conformation.

If you’re planning to buy a Border Collie puppy, research everything about the breed, and even the color of that cute pooch you hope to take home.

With tons of variations in the Border Collies color and markings, it’s like being able to use an entire palette of paint! Even if we haven’t discussed all the shades that this breed comes in, we focused on those that are frequently seen.

If you want to see ALL the colors available for Border Collies, check out the website for Furry Paws.

Do you have a Border Collie with the same color we mentioned or is it different? Tell us all about it by commenting on the box below.